Excerpts from “Principles for Principals – The Principal of Discipline” by Steve Peha, founder of Teaching that Makes Sense.org

Since systems of escalating consequences and even more destructive “zero tolerance” policies define most discipline systems in our schools, how do we create positive change? By changing the definition of discipline.

Actually, we don’t have to change it, we just have to re-learn its meaning and reconnect with its purpose in guiding human behavior and creating safe, orderly, and compassionate communities:

Instead of being “tough on crime” we could decide to be “tough on ignorance.” In this sense, our goal in administering discipline would be educational, not punitive. Through this more nuanced, more humane, and more constructive approach, there are three important ideas kids internalize over time:

(1) My actions have logical consequences. What is the logical consequence of skipping class? Obviously, it’s missing learning. So what should the “penalty” be for kids who skip? More opportunities to learn. This would come, no doubt, at the expense of a student’s free time, and therein lies the lesson of the “logical consequence” approach. This is discipline that teaches on many levels.

(2) My actions affect not only me but also my community. In a system of escalating consequences, kids who misbehave find themselves separated from the community by their outlaw status. In time, they may come to think that their actions affect only themselves because the system has already branded them as different and set them apart from those who have not yet begun to ascend the staircase. Even a student who commits a solo transgression sends a ripple of energy through his or her community that may reverberate for days, weeks, or even months as it affects others who were not even peripherally involved. Effective discipline policies help kids understand how their actions affect others, a lesson every child must master in order to live successfully in a civil society. Structures such as written commitments to improve, activities related to values affirmation, and requests for support from a community willing to oblige, go a long way toward helping kids understand that we’re all in this together.

(3) I am an accountable person; I take ownership of my results. We all want kids to learn to make good choices. But if we never give them any choices to make, and then we hit them with arbitrary consequences when they choose inappropriately, we rob them of their agency—and with it their best chance to strengthen their sense of ownership. In traditional discipline systems, it’s easy for kids to assume a victim mentality, that sense of powerlessness that says “he”, “she”, or “it” did something to “me.” In stark contrast to this is the powerful feeling of personal accountability or ownership of results. In order for kids to mature into responsible adults, they must learn to own the results of their actions in the world. This has nothing to do with being punished and everything to do with helping kids learn to fulfill their responsibilities. This is where kids discover the first law of social physics: Actions can result in both positive and negative consequences. Learning to take ownership of the negative allows one to fully own the positive and to feel the power of human agency. This is true self-esteem building, not the fake “pat on the back” pablum we so often serve to kids in school.

The Path
Kids are going to screw up, every single one of them. Most of these transgressions will seem benign, a few more serious. But kids will make mistakes and wander off the path now and again. And then what do we do? The “zero tolerance” approach tells us to mete out summary justice. The “escalating consequences” approach tells us to start kids on a climb to their own destruction. What is the alternative?

The best discipline models I’ve tried and studied are so-called “one step” systems, or something I refer to simply as “getting back on the path.”

In a “one step” discipline model, kids are either on the path or they’re not. And every time a kid gets off the path, the “one step” we take is to put them back on. In the process, we help them connect actions with consequences, and we work with them to create simple strategies for staying on the path in the future. Rather than encouraging the victim mentality, we teach them to extend their ownership and to shoulder their responsibility when we get them back on the path, and out of being in trouble, as quickly as possible.

Do I want a kid who skips class repeatedly to go to ISS? And then after 10 days of ISS, do I want him to get 10 days of OSS? And after two sets of OSS, do I want him expelled? Not a chance. If a kid skips class, I want him back in class ASAP. I want him using his next five lunch periods to make up what he missed. I also want him to get up in front of the room and talk with his classmates for a minute or two about how his absence may have caused a disruption in our learning community because he knows he is a valued member and that missing class robbed our community of his value to us. I also want him to acknowledge how his action could send a signal to others that skipping class is a reasonable thing to do. And finally, I’d like his classmates to pledge some measure of support in helping him attend class every day thereafter.

But that’s it. I don’t care how many times he skips; the “one step” will always be the same. Why? Because this is the “one step” that assures me and the kid that no matter what happens, he’ll always end up back on the path.

Even if we don’t know what a “one step” discipline system is, we can conceive of its utility relative to more common approaches as follows: 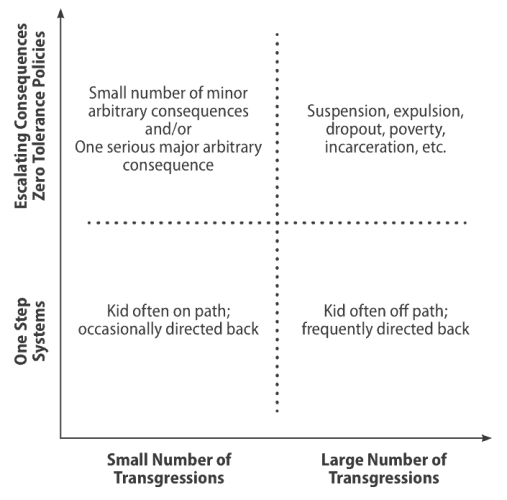